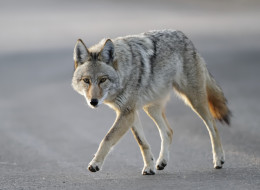 Urban coyotes in Chicago attack a little boy who mistakes one of the the coyotes for a dog and tries to feed it a fruit snack. The mother reported that several more coyotes were seen in the alley nearby.

A 3-year-old boy is recovering after he was bit in the face by a coyote roaming in a city park on Chicago’s West Side.

Family says Emeil Hawkins was bit Oct. 27 near Columbus Park after he and his mother mistook the animal for a German Shepherd. Thinking the coyote was a dog, Emeil tried to feed it before the animal bit him in the face, WGN reports.
via Emeil Hawkins, 3-Year-Old Chicago Boy, Attacked By Coyote After Mistaking It For Dog (VIDEO).