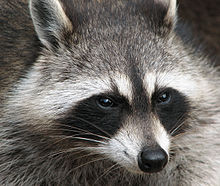 If you are planning on calling raccoons in to the gun or camera by yourself, you should use an electronic caller, not a mouth call.

Why? Because when raccoons respond to either raccoon fight sounds or sounds of other raccoons, they will be amped up and looking for a fight to defend their territory. If you are the source of the sound, you will be the target of their aggression.

If you are calling with a partner, you could use a mouth or hand call to call raccoons. You just need to make sure your backdoor is covered. You don’t want to get surprised by a pissed off raccoon.

I was calling alone one night several years ago and nearly got jacked up by a pissed off raccoon. I was actually using an electronic caller and had it placed about 50 feet from me. About 30 seconds into the raccoon fight call, a big boar raccoon came out charging toward the electronic caller.

I had heard the leaves rustling and knew something was coming in fast. I swung around and hit the coon with the red scanning light and it turned 90 degrees and charged right for me. It happened so fast I could barely react. I raised the Ruger 10/22, turned on the scope light and looked through the scope. By that time the big boar raccoon was too close to see in the scope. Luckily it veered off inside of 5 feet from me, or this story could have had a different ending.

In the late winter season, when raccoons are mating they will be even more aggressive. Keep this in mind.

In my years of predator calling on Cape Cod, I have found that the raccoon fight is one of the best all around sounds to use while calling at night. In addition to raccoons, red fox around here love to respond to raccoon fight sounds. I have also seen coyotes respond readily to these sounds as well.

In the article linked below, Trapper & Predator Caller Field Editor Lance Homman
responds to a reader’s questions on calling raccoons and issues the same warnings.

Mouth Calls Will Work for ‘Coons, But Be Wary

As a matter of safety, I encourage hunters to use electronic calls whenever possible. Recognizing that the price of these calls can exceed some guys’ budgets, mouth calls are a viable alternative. But I strongly encourage you to be as alert, and as safe as possible because responding ’coons are coming to what they perceive as a fight rather than food or out of curiosity…
…I’ve never had a coyote or bobcat try to attack me after responding to conventional predator calling, but I’ve seen numerous instances where responding ’coons spotted me or another gunner, redirected their course and charged directly at us while growling and popping their teeth… – Full Story

So remember, when calling raccoons (especially with raccoon fight sounds) stay alert and be careful.