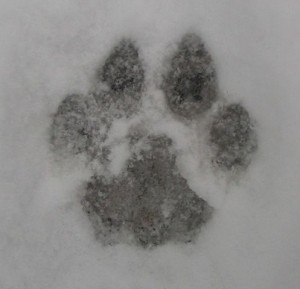 WINCHESTER, MA – A Winchester resident reported seeing a mountain lion in town earlier this week, an animal that’s officially extinct in the area.

Massachusetts Environmental Police responded and saw paw prints that strongly resembled those of a mountain lion — also called a cougar, puma or catamount. The sighting remains under investigation.

The last confirmed mountain lion sighting in Massachusetts was in 1858, in the western part of the state. There have been numerous reported sightings since, but none have been confirmed.

There is documented evidence (DNA tested scat) from April 1997 of a cougar in the Quabbin Reservoir area of Massachusetts at The Cougar Network. (via Bill’s comment below)

Someone’s Lion: A Look at the Winchester ‘Mountain Lion’ Mystery

Experts “conclusively stated” that tracks found in Winchester belong to a mountain lion. But the state says “no way.” Mountain Lion Track Found outside of Boston in Winchester, MA. This is an official photo from the scene. (image credit Winchester Police)

Although they haven’t bagged and tagged a giant cat, Winchester Police are now claiming that a new, second mountain lion sighting, and subsequent tracks found in the snow, do, in fact, belong to a wild feline.

“A photograph of a second paw print located at this sighting was sent to several independent mountain lion organizations in the United States.  Experts from those organizations have conclusively stated that the paw print belongs to a mountain lion,” police said in a statement on March 20. — via Boston Magazine

We already have coyotes, coywolves, fisher cats, bobcats and bears on Cape Cod. The cougars are on their way… or was the cougar already here back in the 1980s??

January 15, 2015 a large cat was photographed in Leicester, MA. It’s hard to tell if this is a cougar or a bobcat from the photo.