Howling for coyotes is an exciting method of locating and/or calling them in.

Locating Coyotes With a Coyote Howler

The lone howl or group howl works great for locating coyotes in an area. One strategy is to go out before dawn to howl and locate where the coyotes are, then mark the spot and return after dawn to call the coyotes in with distress sounds. Another technique is to locate coyotes with the lone howl, then move a short distance and immediately try to call them in using distress sounds.

One thing to remember is that just because you don’t hear a coyote respond to your howling, it doesn’t mean that there isn’t a coyote or a group of coyotes on there way in towards you to investigate the source of the howls. I have on several occasions when howling, seen coyotes come in immediately without them making a vocal response first.

When locating coyotes for calling in later on, I’ll often do my howling from the window of my truck. That way if they do come right in without a vocal response, I won’t spook them. Coyotes around here are used to seeing vehicles and will not spook as easily as if you were standing there outside the truck.

Using a Siren to Locate Coyotes

Coyotes will also respond to a siren. Where I live, near where two main roads intersect, there are often fire engines and ambulances going by with their sirens blaring. Often after the siren fades into the distance, you will hear a coyote or a group of coyotes respond to the siren noise with howls of their own. Recordings of sirens are used in an electronic caller as a method of locating coyotes.

Calling Coyotes in by Howling

Coyotes will often come right in to a howl. They may or may not howl back first and they could be right on top of you before you know it. If you are just out locating coyotes by howling and not planning to call them in immediately, don’t let them see you. If you hear one respond, make a note of the location and get out of the area as soon as possible. If they see you, you are busted and calling that spot later will likely be a waste of time.

If you are trying to call coyotes in to you with a howler or recordings of coyote howls, you might want to stay on the stand a little longer since the coyotes might respond from a long ways away and it could take them a while to get to you. Depending on the terrain, coyotes can easily hear a howl on a still day from miles away.

One thing to be aware of when using a challenge howl is to not over call when a coyote challenges back at you. A good technique is to only bark and howl back each time a coyote responds vocally with his own threat. If it becomes quiet after hearing a response, the coyotes may be coming in to check you out, so be alert and look for them. 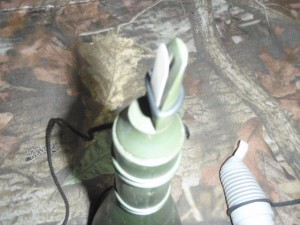