The other night, I was in the barn and I heard Duke, my twelve year old Pembroke Welsh Corgi outside doing his “coyotes are in the yard” bark. I knew something was up, so I grabbed my eBay $20 Cree LED headlamp and headed outside to check out the scene. 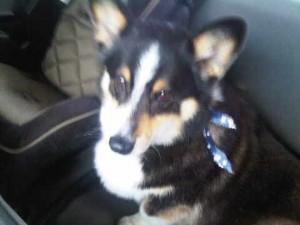 As soon as I get outside, I see Duke charging after two healthy looking coyotes and called for him to heel. After chasing back and forth for a minute or so, the coyotes ran about 30 yards away and circled back around to a downwind position of us. I went and put Duke in the house, then went back outside to see if I could get a better look at the coyotes.

After a few seconds of scanning with the bottom edge of the white LED headlight halo, I saw two pairs of amber eyes through the woods at about 60 yards. I did a few lip squeaks and the coyotes quarter-circled me to my right and came in to about 20 yards away. More than close enough for a shot with the camera or gun. After a minute or so, the coyotes got bored with me and retreated back into the thicker brush.

Pembroke Welsh Corgis are not the best breed to use as coyote decoy dogs. However, I have seen Duke “dog” several coyotes over the years, and so far he has held his own. But he’s getting old now (about 75 years old in human years) and he was also out numbered, so I kept him in for the rest of the night.

What is a coyote decoy dog?

Decoy dogs, used in conjunction with a predator call or coyote howler, are an effective technique to reduce coyote depredation on domestic sheep ranges during the spring and summer when coyotes are highly territorial and aggressively protect their young and den area. Trained decoy dogs, when chased by coyotes, return to their owner bringing the coyotes into shooting range. — Decoying Coyotes with Dogs (PDF)

The video below, filmed in Arkansas, is a pretty good example of how decoy dogs work on coyotes.