With the presence of coyotes, fishers and more wild turkeys than when the Pilgrims were here, Cape Cod is arguably more wild then it has been in hundreds of years. As the Cape gets more “wild”, there is more to be concerned about regarding local wildlife and local residents living together.

Talk to your children about wild animals. Make sure they know that the wild dog they see is not a friendly pet. Let them know that the coyotes are more afraid of them than they should be of coyotes. 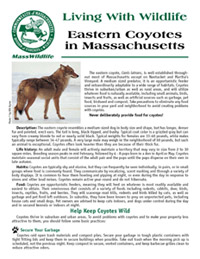 Tell them not to run if they see a coyote. Running may trigger the animals prey instinct and get your child in trouble. Tell them instead to stand up tall and raise their arms above their heads and wave them back and forth. This will make the child appear to be larger than they actually are to the coyote. Tell them also to be loud. This should not be a problem for most children and should make the coyote even more afraid of them.

While coyote attacks for the most part are rare, the more serious coyote attacks on humans which resulted in serious injury or death have occurred when the victim ran from the coyotes which likely triggered their prey instinct.

Don’t feed your animals outside. The regular presence of pet food in your yard or on your porch will attract wild animals. This could lead to a confrontation which could leave your pet dead or severely injured. Confrontations could also expose your pet to diseases that may be carried and transmitted by these animals.

Distemper and canine hepatitis are the most common diseases occurring in coyotes. Rabies and tularemia also occur and may be transmitted to humans and other animals. Coyotes often carry mites (mange), ticks, fleas, worms and flukes.

If you love your cats, don’t de-claw them, your cat’s best defense against canine predators is it’s ability to climb. If your cat is not a climber, keep it inside the house.

Just about everyone on Cape Cod knows someone that has contracted lyme disease. Lyme disease is a serious concern for anyone that spends time in the outdoors these days.

The exponential increase in deer numbers throughout the United States from an estimated 500,000 in 1900 to 30,000,000 today has greatly increased the number of deer ticks throughout the country. Increased outdoor recreation, extended forest cover (especially in the Northeast), reduced hunting in some areas and continued suburban sprawl are some of the factors involved in the rise in reported cases of Lyme disease and other tick-borne infections in humans throughout the United States. — American Lyme Disease Foundation